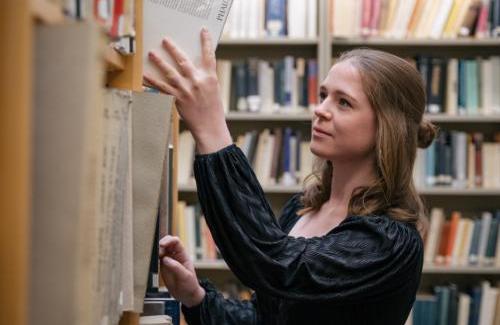 The College library is available for use by all members of Pembroke and our friendly staff are a mine of information and happy to help. 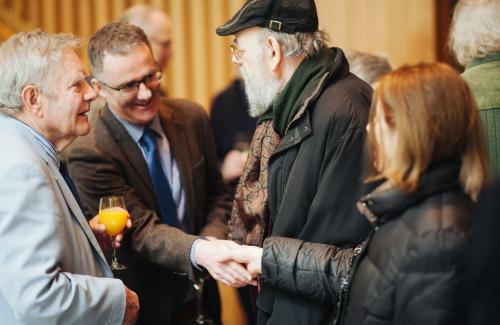 As we approach our 400th in 2024, we are once again calling on alumni and friends to help us achieve our vision for the next 400 years. We want Pembroke to be influential, inspiring, and resilient.

The archives contain documents relating to the College’s history, buildings and finance as well as papers pertaining to individual members of the College, photographs and memorabilia. The archives are typically referred to by various departments within College, external researchers, Pembroke Alumni and their descendants, and others such as purchasers of land or property which once belonged to the College. The material contained in the archives therefore provides both a source of formal records and management information for the College, and a picture of life at Pembroke through the years since its foundation in 1624.

Enquiries regarding the archives should be made to the Archivist, Amanda Ingram. Amanda can be contacted at archives@pmb.ox.ac.uk and can provide basic information, answer straightforward questions and provide a list of material available on a given topic. Please note that she is unable to carry out detailed research on behalf of enquirers.

Visitors wishing to consult the archives are admitted by prior appointment only (Thursdays and Fridays); please contact the Archivist to make arrangements. 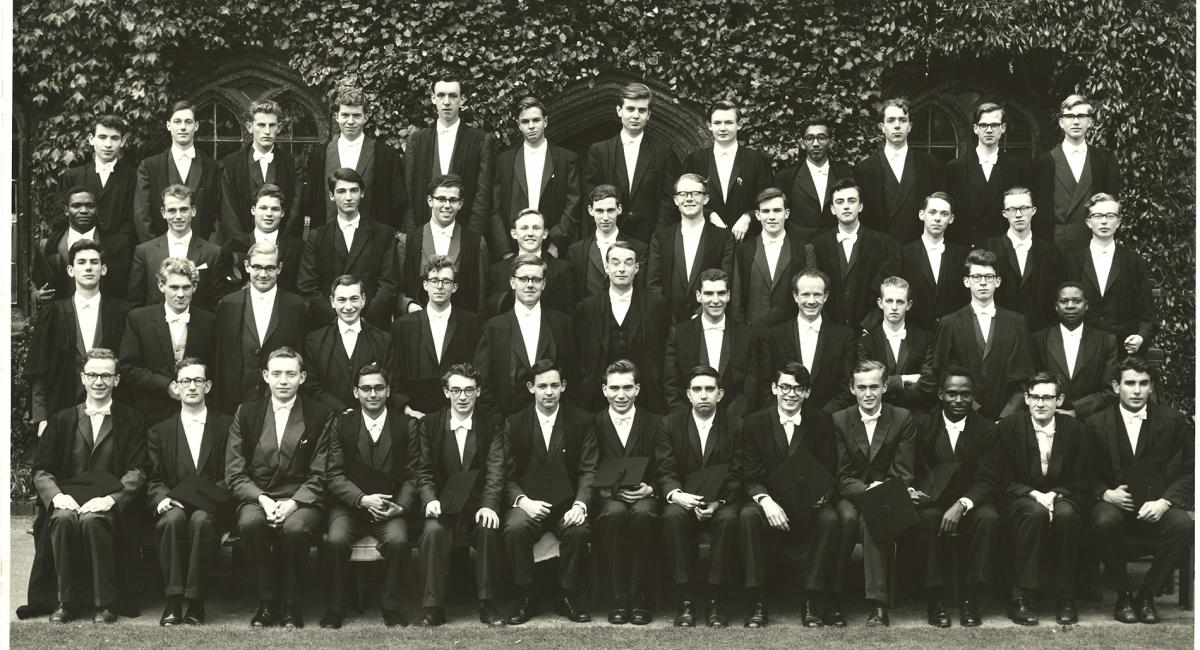 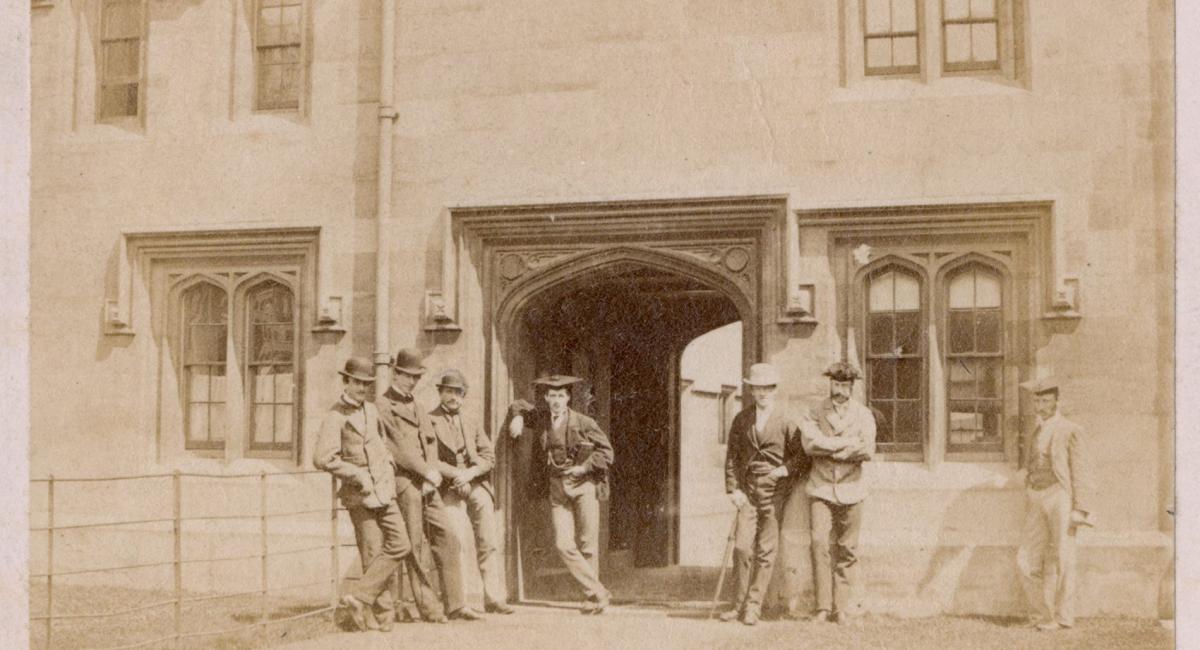 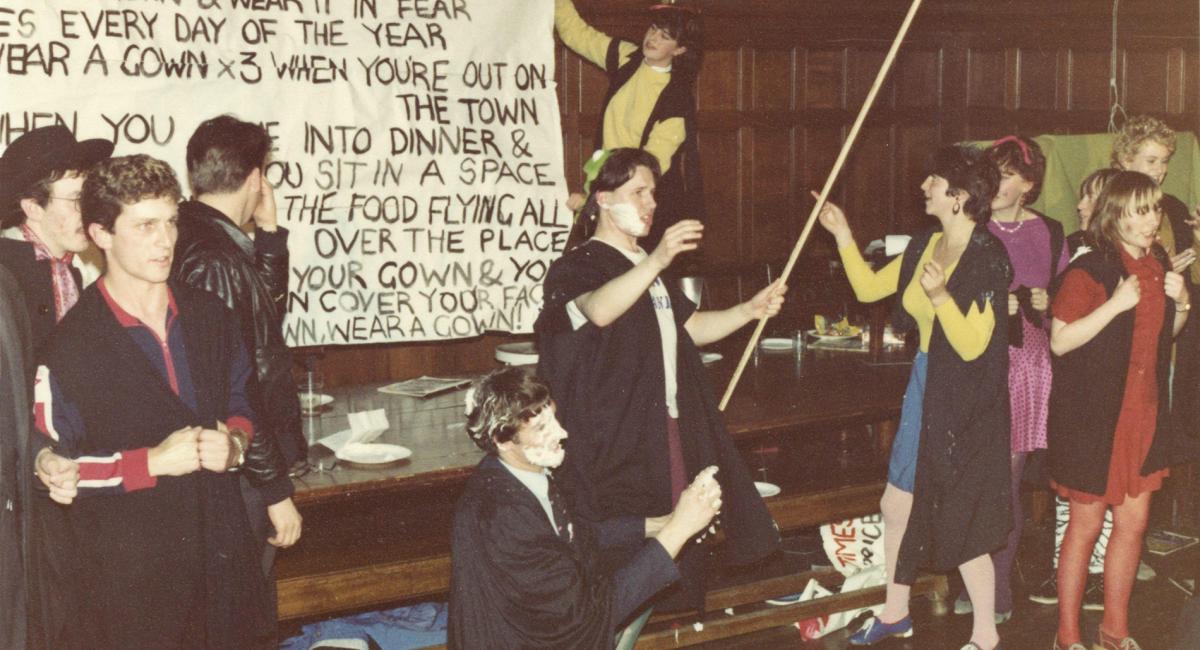 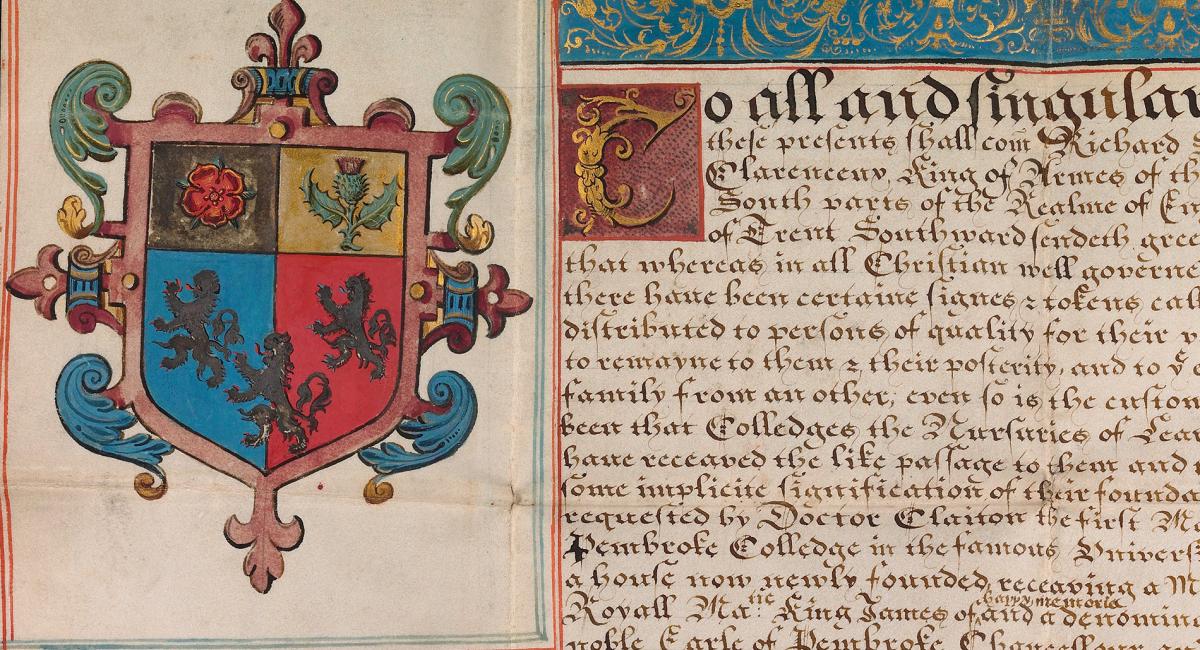 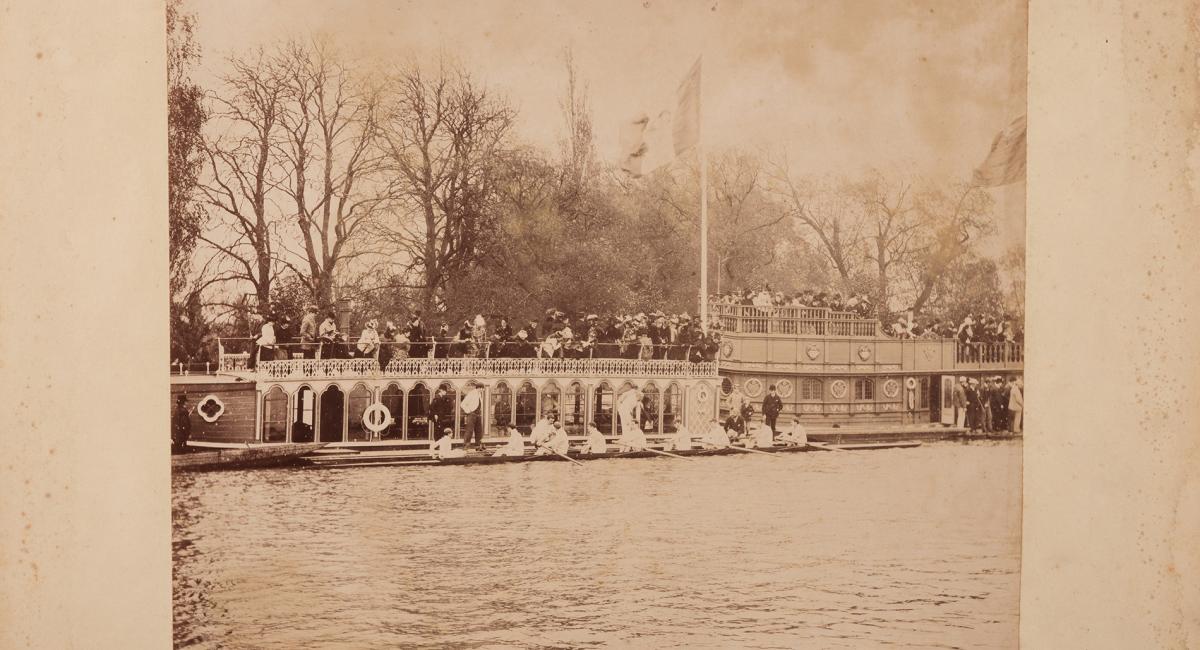 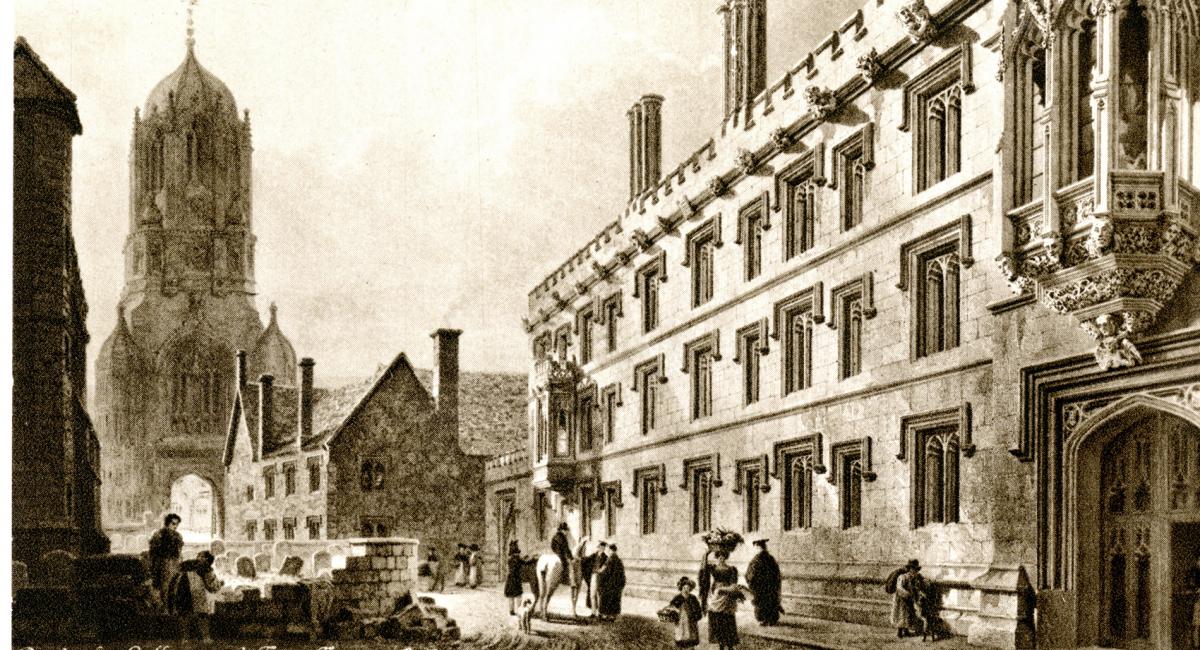 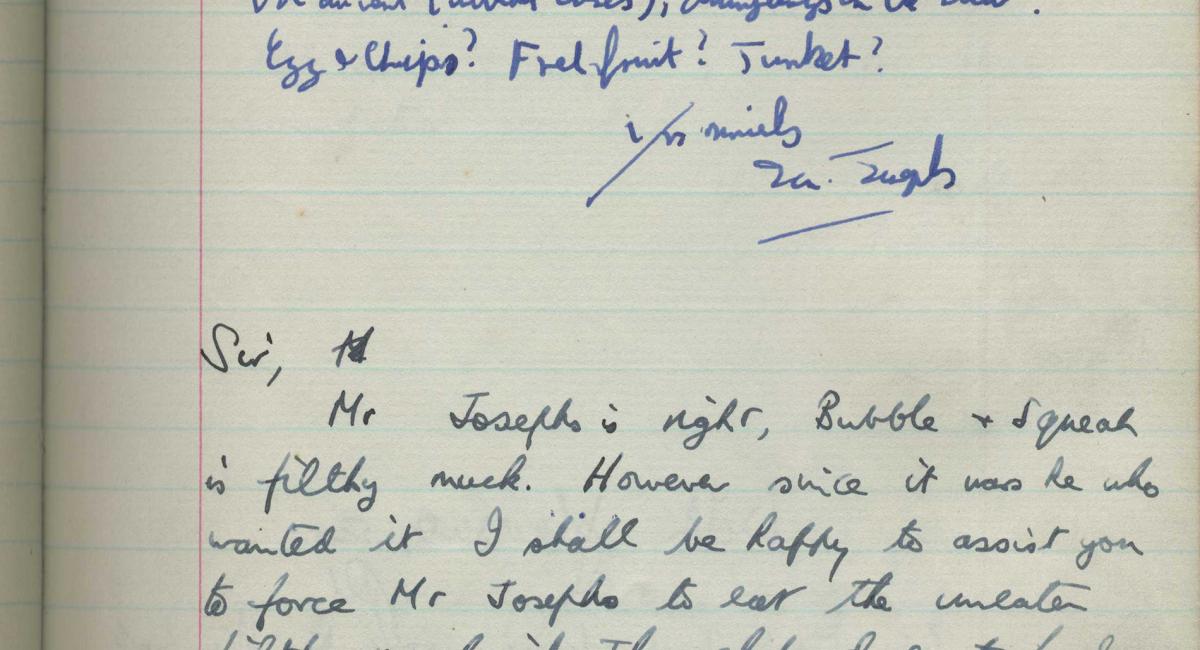 Oxford, with its origins in the Twelfth Century, is the oldest British university and has for centuries been an internationally renowned centre of learning. From the early days of the University, Broadgates Hall, from which Pembroke College was founded, existed as a hostel for law students.

In 1610, an Abingdon merchant, Thomas Tesdale, left funds in his will for the education of boys from Abingdon School at Oxford. This was, initially, to take place at Balliol but, eventually, the decision was made to found a new college with an additional benefaction from Richard Wightwick, a Berkshire clergyman.

In 1624 King James I signed the letters patent to create the present college, which was named after the 3rd Earl of Pembroke, Lord Chamberlain and Chancellor of the University. The Grant of Arms from the College of Heralds, dated 14th February 1625, incorporates the rose and thistle - recognising King James I of England and VI of Scotland - and the three lions rampant of the Earl of Pembroke’s shield. Signed by Richard St. George, Clarenceux King of Arms. It describes the shield as:

“Per pale azure and gules three Lyons rampant Argent, in a Cheife party per pale Argent and Or, in the first a Rose Gules, in second a Thistle of Scotland proper”.

The College has seen several periods of expansion. The first quad, now known as Old Quad, was created over the remainder of the 17th century with Broadgates Hall in its North-West corner. The Chapel was completed in 1732 and the 19th century saw the creation of Chapel Quad, including the Dining Hall and Fellows’ staircase, with the Almshouse being purchased in 1888. The 20th century saw the construction of the Besse Building in 1954, the creation of North Quad in the 1960s, the building of the McGowin Library and the Macmillan Building in the 1970s and the Sir Geoffrey Arthur Building annex across the river in 1990. The most recent expansion was the construction of the Rokos Quad which opened in 2013.